Hi! So, you all probably know by now that I am sewing a Tauriel costume and creating a cosplay masterpiece. What you probably didn’t know, is that I’m completely finished. Something else you probably want to know, is the “how?” Well, I don’t know if there’s anyone following me who sews, loves the Hobbit, and admires Tauriel’s no fear of orcs mentality. But, if there is, this is for you.

Tauriel can’t be Tauriel without her dress. There are four different dresses and I named each one myself with the help of a Hobbit/Seamstress savvy friend. 🙂 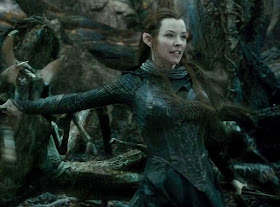 Same as the Laketown Dress only with a leather bodice and she threw on a scarf. 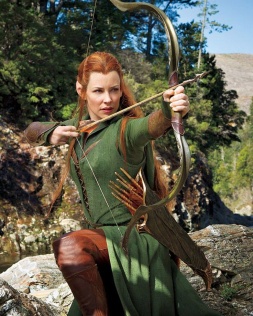 This is the dress she wears when she gives Legolas a scolding. You should know that I don’t like Tauriel for the disrespect she gives Legolas. He’s awesome. I wrote a whole post about it (click here for that). 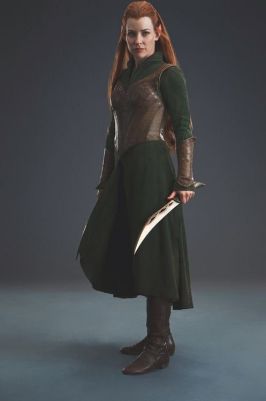 This is the dress I made…she wore it on the Forest River! My most favorite scene in the Desolation of Smaug! 🙂

#1 – Fabric: Satin looks really nice and that’s what I used for my dress. I wouldn’t recommend it for beginners because it is EXTREMELY fray-ish. It will be frustrating. I actually heard that the real Spider dress is made of Crinkle Taffeta and the Archer Dress is made of Suede. I don’t know where you can buy Crinkle Taffeta, though. How much fabric to get: about 4 yards. I used the Simplicity Pattern 1347 and I think I got about 3 1/2 – 4 yds. For the leather bodice, I didn’t use leather. I know it looks like it, but it’s not. It’s called Polyester Leather Look (I bought it at Hancock fabrics for like $19.99 a yard – the reason it’s so pricey is because it looks like real leather but it’s not).

And this is 4940…view B is the Eowyn shield maiden…i think that will be my next project! Eek!!

My bodice uses grommets and twine instead of a wonky zipper. I don’t think Elves use zippers, so I thought grommets would look more elvish.

Front of my Bodice: 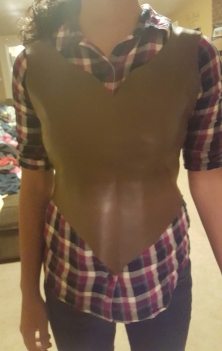 Back of my bodice:

Please excuse the plaid shirt…I went to a square dance and (had the best time, thanks Kaitlin!) had to look cowgirly. More on that later…expect that post on Wednesday (10-28-15 :P)

Most people probably don’t know this about Tauriel, but she wears a necklace! Yes, you didn’t know that. I didn’t either. You can actually see it pretty clearly in the part in Desolation of Smaug where she’s reporting to Thranduil: 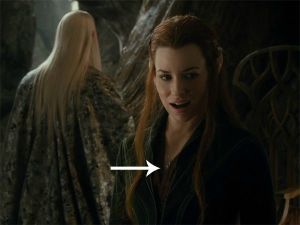 I used an arrow to kind of point it out, but click on the picture and then it’ll show it more clearly! I actually bought my necklace on Amazon for a pretty good price (click here for that), and I really like it. You can buy the official one on WETA for $179.99…click on the picture to go to the link: 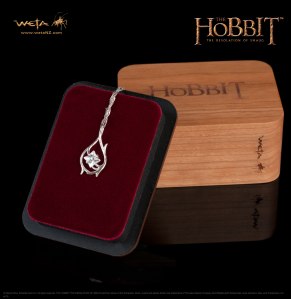 All the girls I know say,”I love Tauriel’s hair.” It’s so long and wavy and braid-y. I love it. I would not buy a wig – you have to pay a lot of money to get a good one and if I had to buy one, it would be cheap and would fall apart. I’m going to actually dye my hair a red like hers and just braid it. Here’s some tutorials on Youtube (doesn’t everyone learn how to do stuff on youtube now?)

Braids Inspired by “The Hobbit’s” Tauriel by LaDollyVita33

The Hobbit Hair – Tauriel by Silvousplaits

Tauriel Hair Tutorial | The Hobbit by Loepsie
Elf Ears:
Elves can’t be elves without pointy ears. They just can’t. I recently bought a pair on Amazon and apparently the seller thought that Legolas had ears like Legolamb from Lord of the Beans! In other words, they were awful. I didn’t like them. I was recommended by a fellow cosplay blogger of Aradani Prosthetic Ears and those are the ones I plan to get after I return the Legolamb ears. Click here for that…here’s a pic: 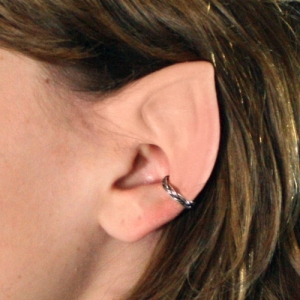 These are just one word: epic.
I wouldn’t worry about Tauriel’s weapons, but I would suggest asking for the daggers for Christmas. Which is what I’m doing…debating between Tauriel’s daggers or Legolas’ daggers – either one is epicly epic (is that even a word?). I’m using my own bow for my photo shoot (when I took archery lessons, I got one for practice last year). It’s not accurate, but I think it’s better than paying $300.00 for the official one on WETA. The daggers are $179.99, so I think I MIGHT a better chance with those for Christmas.
So, that’s about it! I hope this helps and wish me luck with my cosplay photo shoot and finale!
All for now,
Emily 🙂