It’s been a while since my last post so please forgive me for silence :P.

Life has been well lately. School has consisted of extensive portions of algebra, technology and fulcrums in science, and indirect objects which really confuse me in language. I always dreamed of the day I could say,”I’m in high school”, and now it seems like the spirit of education itself has cracked down on me. During the days, I sometimes just want to go and take the longest nap in the world and cease to look upon 3x’s and 9b’s. If you take my meaning. In the midst of my “troubles”, I read something in my daily reading this morning that thoroughly encouraged me and I found it worthy of sharing for all of you fellow 9th graders (and everyone else who reads this blog :P)

I haven’t exactly read the most encouraging things in my daily Bible study, because I’ve been stuck in a book called Job. It’s been pretty difficult so far (i’m only on chapter nine 0_O). Even though Job’s pleads and cries are snuffed out by his less than helpful friends, he is persistent and wants nothing but to honor God in his less then admirable life.

Although the book of Job is full of laments and cries for help, there are tons of little spiritual truths that I’ve pulled out – which is why I’m writing this post.

I noticed this morning that after a scolding from his friend Eliphaz, he praises God and magnifies his name in the midst of his despair. Observe:

He is wise in heart and mighty in strength
—who has hardened himself against him, and succeeded?—
5 he who removes mountains, and they know it not,
when he overturns them in his anger,
6 who shakes the earth out of its place,
and its pillars tremble;
7 who commands the sun, and it does not rise;
who seals up the stars;
8 who alone stretched out the heavens
and trampled the waves of the sea;
9 who made the Bear and Orion,
the Pleiades and the chambers of the south;
10 who does great things beyond searching out,
and marvelous things beyond number.
11 Behold, he passes by me, and I see him not;
he moves on, but I do not perceive him.
12 Behold, he snatches away; who can turn him back?
Who will say to him, ‘What are you doing?’

We see Job: a man of suffering, loss, and poor choosing of friends. He has the worst possible life anyone could ever imagine; which in today’s culture would probably result in suicide. Even Job’s wife told him to curse God and die (Job 2:9)! In the midst of the trouble and hopelessness, Job praised God! He expresses his feelings to God, asking Him why, he praises God, and he thanks God in the core of all his anguish!

A few months ago I was tried heavily  and almost everyday I shed tears. I threw myself upon my bed and cried until I could cry no more. I didn’t find any relief for my bitterness and sorrow until I entered my prayer room. The lights shone and the pillow beckoned for my presence, so I sat. I opened my Bible and read, I opened my journal and wrote. And after a while, my tears dried and my heart warmed with His presence again. O the joy that filled (and still fills my heart).

What God truly showed me through Job and my trying times, is that when I am a nervous wreck, I simply must always look to God. Not anger, or self abuse, nor pornography or drugs, alcohol, food (although delicious :P), or things – the list goes on and on. Only Christ. Does marijuana deserve praise after a week of smoking and you look lifeless like a dead man walking? Does alcohol deserve praise after a night of heavy drinking and the result of fatal injuries due to a car crash? No. Do we praise Christ after on minute spent with Him in His presence full of encouraging verses and a Spirit of Him that comes with us all day? Yes. When Job was lifeless, he looked to God. Even when his friends told him he was screwed up, he knew what God thought about him and he knew that God had not forsaken him even though everything seemed ruined. He praised, thanked, and cried out to God even in the darkest times.

My mouth has gotten me no where lately. I get angry at myself for spitting out brash language. I feel like I’ll never get over it, but I will. I praise God for putting me through this because it will refine me into a young lady of graceful language. He’s going to make me even better than I was before.

Well, I must remember these things when I come across problems like: 3b+6p+pi4p-9a(4p x 5v)

Until we meet again dear readers! Be encouraged and don’t let anything get you down. We have the God of gods on our side to hear us and act upon our cries.

What, then, shall we say in response to these things? If God is for us, who can be against us?

P.S. I finished my Tauriel cosplay, but I also finished an Arwen cosplay for my sister and an Eowyn cosplay! Photoshoots and tutorials should be coming out soon – photoshoots a lot later (we just got 2 feet of snow here in colorful Colorado and I don’t think it snows in Mirkwood, Rivendell, or Rohan/Gondor :P). Here’s some pics (they were taken before the blizzard): 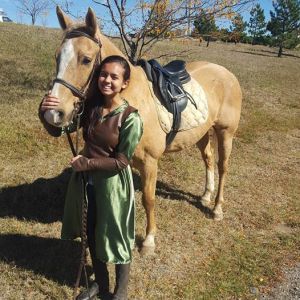 Tauriel (moi) and her horse 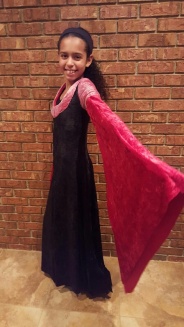 My sister Ally wearing the Arwen Blood Red Cosplay I made 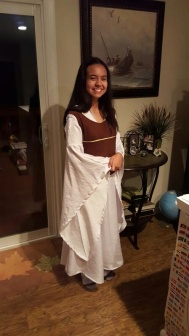 Me in the Eowyn Shield maiden cosplay

Lord-willing my next project will be a {Fem} Legolas!! Eek! 🙂

A place to read about arts & culture, from my own quirky perspective.

The Musings of a Myth-Maker

the stories are true