“One book had a dark stain on it that looked horribly like blood. The hairs on the back of Harry’s neck prickled. Maybe he was imagining it, maybe not, but he thought a faint whispering was coming from the books, as though they knew someone was there who shouldn’t be.

He had to start somewhere. Setting the lamp down carefully on the floor, he looked along the bottom shelf for an interesting-looking book. A large black and silver volume caught his eye. He pulled it out with difficulty, because it was very heavy, and balancing it on his knee, let it fall open.

A piercing blood-curdling shriek split the silence – the book was screaming! Harry snapped it shut, but the shriek went on and on, one high, unbroken, earsplitting note. He stumbled and knocked over his lamp, which went out at once.”

– From Harry Potter and the Sorcerer’s Stone by J.K. Rowling, chapter twelve, The Mirror of Erised

“…compare and contrast your selected worldview (Secular Humanism, Hinduism, Buddhism, or Islam) with the biblical worldview.”

Such was the prompt that drove me up the wall all weekend as I struggled to write a paper about the similarities and differences of Hinduism and Christianity.

I received the email from my professor on Tuesday announcing the dreaded monster that we ourselves had to create and submit by the end of the week (Today @ 11:59 pm EST). A few things that set me apart from the average college class student are as follows:

Thus, when reviewing the second bullet point—my loving papers—it can be assumed that I jumped at the chance to write this paper. You would assume rightly, for I was literally dancing with excitement at the news of a research paper—and on a religion (“of all the interesting topics”)!

I have always had a “thing” for Hinduism and eastern archaeology and religions since I was really little. I loved Indiana Jones (when I wanted to) as a little girl. Honestly, I wanted to go live in Egypt, wear a turban, become an archaeologist, and maybe dig up the Ark of the Covenant.

Considering that, it is obviously pretty plain to see why I chose the religion I did: Hinduism. I had always found eastern religion and things like that very interesting. Interesting, but not intriguing.

Anyway, skipping merrily to my computer, I logged on to my library’s website and reserved some books on Critical Thinking and Hinduism. I started thinking about the sources we had used in my class on the mystic subject. There were not very many meaty ones, so I knew that library books and a few books from my world religion unit last year would be helpful.

On Saturday my books were ready. Running errands for the coming week, my parents and my siblings stopped by the library on their way home.

Drrrrrr…the garage roared as it opened lazily, chugging and squeaking against the rusty tracks. I knew they were home, and I was ready to begin taking notes and composing a beautiful piece of writing! I sped down the stairs, thumping and stomping my way down. In the garage, my family met me with an armful of books. A big fat one had to be at least one thousand whole pages. The Norton Anthology of World Religions was, actually, over two thousand pages—and to my amazement, I learned it was only the first volume of three! I grabbed the books hungrily and sped back up to my room as quickly as I had come down. I laid all the books – three total – on my desk and opened them up.

I think my head was about to explode when Mom popped in to check on me. I had been in my room for about three hours or so, working out my first paragraph: the origins of the world.

I wanted to say “not good,” but thought it would be pessimistic.

I was finding Hinduism to be a little less fascinating than I thought it would be. From the stories of incestuous creation possibilities, to the myths of Krishna, Durga and the buffalo demon, I was disgusted and mentally disturbed by the doctrines of Hinduism. The seductive goddesses and maidens, the lusty men and their partners, the goddess Kali who eats little children, and Brahma with his four-faced head. As for Kali’s husband, Shiva, let’s just say he lives up to his name as “Shiva the ‘Destroyer.'” I was desperately overwhelmed and in need of a good faint.

After finishing one beautifully written paragraph about Hinduism’s world origin beliefs, I took a bike ride alongside the river of my beautiful city. Fresh air felt nice. The leaves have turned yellow, orange, and deep red. The gentle breeze ruffled my hair and autumnal colored leaves skirted, flitted, and danced along the path with me. Fall felt nice.

The next day, I was ready to tackle the grueling task of writing four more paragraphs about Hindu doctrines: morality, death, identity, and purpose. I was practically hyperventilating. “Okay, here we go.”

I cried out to God during my shower, practically begging Him to give me the words to speak so I could finish this paper that was just as monstrous as the Hindu gods.

Ah. The last period was placed. The last words were typed. I fell back on my chair and sighed in relief. I’m done! Every last bit of that paper is done. It’s all over. No more!

Elation. That is truly the only word that can describe my state after finishing the paper. Complete vivacious elation. Totally exuberant.

I glanced at my room.

It was a complete and total mess, so upon my deciding to clean it, I pulled out my radio and listened to my next chapter of the Harry Potter and the Sorcerer’s Stone Audio.

I found myself on the twelfth chapter, The Mirror of Erised. In the chapter, Harry receives a cloak of invisibility from an anonymous giver at Christmas, and uses it to sneak around Hogwarts at night to the restricted section in the 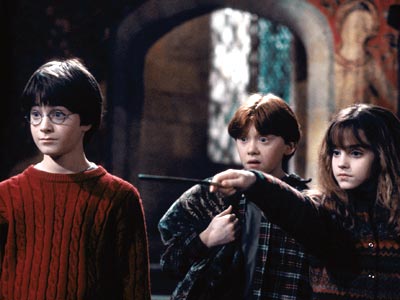 library. The books about Dark Magic were kept in the restricted section, and Harry was determined to look in them for the sake of curiosity and other reasons I will not discuss (no spoilers here). After opening up one of the books, there was a loud scream that split the silence. It turned out that the book was the one screaming! He shut the book and ran out of the library.

I thought it was rather funny how Harry had the same experience I had with books and libraries. Although I did not sneak around doing what I was not allowed to, I did stumble on some books that screamed at me and made me want to cover my eyes and ears at their heinous content. Between me and Harry, he was at a disadvantage: he had no one to run to.

After feeling dirty, tainted, and disgusted at the research I had conducted on Hinduism, I ran to my Father God and my Creator. I was ashamed to do so. I had been researching other gods and immoral literature! How could I approach God that way? I will be honest. I still feel gross and dirty at the doctrines I wrote about. There was so much sin and immorality that the Holy Spirit grieved within me and I felt like running into a hole and hiding forever.

“Let your unfailing love surround us, LORD, for our hope is in you alone.”

Graciously, the love of our God is unfailing. Just like the prodigal son, he came running to meet me when I was scared half to death over Kali’s bloody tongue. The gods of this world are like an ant inside of Jesus Christ’s big shadow. Even though I despaired over what I learned, it showed me just how wonderful and sovereign the one and only true God is. With all the power He has, He could do anything, and it would be alright. Instead, He shows us unfailing love and hope. And He’s always there with His arms open wide; ready to run out and meet us.

Luckily, after realizing all this, Mom had a steaming, satisfying, and comforting bowl of chicken tortilla soup ready with chips and a little cheese ready for me to devour. I slurped rather loudly.

It just proves to show you: sometimes God shows us His truths, love, and mercy when we write Hinduism papers, read Harry Potter, and eat happy food.

I made my model for my Rey Last Jedi costume! Here ’tis!!! 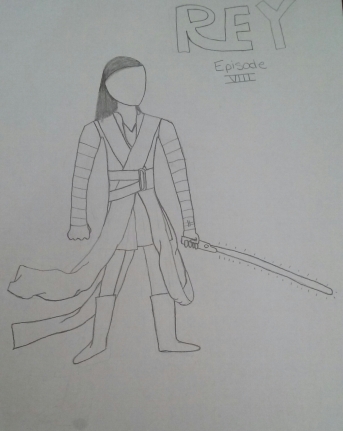 I am so excited for the Last Jedi!! Did anyone else think it was weird seeing Phasma again? I did. I need to seriously get some second opinion. If you guys have any ideas, seriously shout it out. So weird. I thought they threw her in the trash compactor??

Also, I did not actually have time to make a costume for October 31st this year, so I bought a costume off CosplaySky. Yes, I did. While we are on the topic of Harry Potter, I decided to go as Hermoine Granger this year. I love Emma Watson 😛 ! I started reading the Harry Potter books over the summer, and Hermoine was like my alias at Hogwarts. I am such a policeman. I am really excited for this year’s costume stories, so stay tuned! Rey is going to be really awesome, too! I am so excited for The Last Jedi!!! Also, there is a horse at the barn named Star I have been riding lately, and he wants to be Harry Potter. Harry and Hermoine FTW at the barn’s costume contest! Wahoo! I will fill y’all in on it soon!

Why do some weirdos spell Auf Wiedersehen as one word? I shall never know.